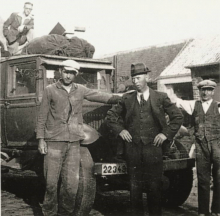 To trace the origins of WILLEMEN GROEP, we take you back to the nineteenth century. It all started seven generations ago when Pierre-François Van Poppel launched his bricklaying business in Mechelen. Decades later, in 1956, NV Algemene Ondernemingen Van Poppel would emerge from this business, established by Alfons Van Poppel and his brother-in-law Paul Willemen. The turnover increased year by year and additional warehouses took up more and more real estate. Thanks to Paul Willemen’s efforts in countless national and international professional organisations, such as the Belgian Construction Confederation, the WTCB, and FIEC, tthe ‘Van Poppel’ brand gained increasing recognition outside the Mechelen region. The growth process had begun.

In 1972, Paul’s son Johan joined the company. Alfons and his son Paul Van Poppel focused their efforts on residential housing, while Paul and Johan Willemen looked after the other activities. In 1984, NV Van Poppel acquired Sanitechniek. However, the first real expansion took place in 1996 with the acquisition of Ergon from the Finnish holding Partek. At the time, Ergon was the Belgian market leader in the production of precast elements in prestressed concrete. This was followed, in 1998, by the acquisition of Franki, a large contractor specialising in civil engineering works.

Not only was there a sharp increase in the number of projects, but the projects themselves were also increasingly larger in scope. By the time the third generation – Tom Willemen and Bob Van Poppel – joined the company, the decision had been taken to split NV Van Poppel in half. The Van Poppel family continued to focus on residential construction, while the Willemen family took over the responsibility for commercial construction (offices, apartments, etc.). This led to the establishment of Willemen General Contractor in June 1999. Along with Ergon, Franki and Sanitechniek, this company was incorporated under the present Willemen Groep. At that time, the group had a turnover of 150 million euros.

With a view to its own identity and continued growth, Willemen General Contractor moved into the offices on Boerenkrijgstraat in Mechelen in 2000. The contracting and holding activities were placed in separate companies at the beginning of 2004. Ergon was sold one year later to the Irish group CRH. The group had its first large foreign production plants thanks to Ergon. The Industrielle du beton site near Paris was transformed from a heavily loss-making production unit into a highly profitable and modern precast concrete factory. A completely new concrete plant was built in Mszczonów (Warsaw) to introduce prestressed concrete in Poland, to great success. When Ergon was sold, these foreign branches were also acquired by CRH.

In order to organise material management better and more efficiently, the logistics services of the three contracting companies were brought together within Tools in mid-2006. A year before this, Cosimco and the Groep De Waal were also added to Willemen Groep. The acquisitions of Réforme (2009, merged in 2010 with the Walloon division of Franki), the Aswebo group (2011), and Aannemingen Van Wellen (2014) were the most important milestones for the group. Each of these construction companies also expanded their foreign activities or took their first international steps during this period.

Kumpen (50% share of the group since 2011) was fully acquired and integrated in 2018. Willemen General Contractor and Kumpen’s construction department merged to become Willemen Construct on 1 July 2018. Similarly, Aswebo and Aannemingen Van Wellen also merged with Kumpen’s infrastructure department to become Willemen Infra. These two mergers means we can better coordinate our activities and simplify our group structure in order to serve our customers even better.

In addition to these acquisitions, important internal reforms were also implemented from 2008 onwards. There was a Supervisory Board established with external directors. The board’s objective is to guide the group in its ambitious growth plans and the professionalisation of its organisational structure. Since 2009, the support services (Finance, IT, HR, Legal, Risk & Insurance, Innovation, Business Transformation, and Communication) have been bundled in Service Centers. In this way, every company within the Willemen Groep can concentrate on its core tasks and is given room to do business.

One of the largest family construction groups in Belgium

Today, Willemen Groep has 2,200 employees and an annual turnover of over 800 million euros, making it one of the largest family-run construction groups in Belgium. The group also got a foothold on the African continent a few years ago. From its office in Casablanca, Cosimco realises numerous industrial projects in Morocco and Willemen Construct built the new Belgian embassy in the Congolese capital of Kinshasa. It's the first passive building in Central Africa. We built a new container terminal with a quay length of 1,200 metres at a 60-hectare site in the port of Tangier. It is the first automated container terminal in Africa and one of the most technically advanced in the world.

2013 Entrepreneur of the Year

In 2013, the Willemen Groep received the prestigious ‘Entrepreneur of the Year’ award.